Last night I found myself at a park that sat along the Mekong River. My kids hadn’t seen a play ground since we left Maui and when Chelsea and I saw this one, we knew we had to take them. We arrived at the park at around 5:30 PM and by the time we got there it was packed full of people and street vendors. Dozens of tiny huts lined the parking lots with everything from fruit smoothies to flip flops.

I found myself surrounded by thousands of smiling Laos’ (the people that live there. )  All of them had smiles on their faces and most were laughing with each other.  Some were playing on the playground with their children. Some were playing badminton (you know that game that’s kind of like Tennis but played with a birdie).  Some were working out with two hundred of their closest strangers in giant aerobics classes (More on that later as these were a riot). Some were stuffing their face and drinking beer while others were simply enjoying themselves along the picturesque Mekong River.

As the sun began to set we pried the boys away from the park and headed toward a large statue.  It was roughly thirty feet tall and was the image of a Lao man holding a samurai looking sword in its scabbard while reaching his hand out for an embrace. I was curious what this towering monument was all about so we trudged lazily to read the placard, enjoying the sunset along the way. As far as sunsets go, it was stunning. At this point of my life I have had the pleasure of seeing two sunsets over the Mekong river and I would say their beauty rivals any I have seen from anywhere in the world. There is something timeless about the river as men fish with hand lines and children race along the shore that only serve to add to its charm. By the time my family and I made it to the statue, it was official, we had all fallen in love with the Mekong River Park. 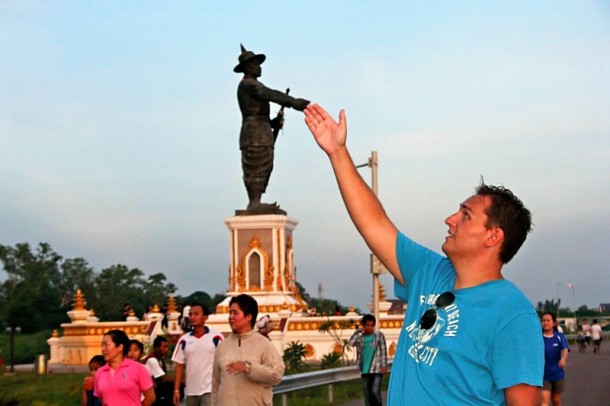 The statue proved a bit anticlimactic as the placard was in a language I had never seen before and then a thought leapt into my mind. The area seemed familiar and I felt like I had seen it before on the Amazing Race (Turned out I had in season 11).

I knew nothing about Laos (pronounced Lao). Earlier in the day I had found out the conversion rate of their currency from Thai Baht and US dollars from a mini mart clerk, but I didn’t know what it was called. I didn’t know what type of government they had, I knew next to nothing about their history, and I didn’t even know what language they spoke (Even though I could say Hello and Thank you in it :)). Many of you might be alarmed that my family and I found ourselves in a country that we knew next to nothing about but I assure you it was no big deal. In any event, my curiosity had been aroused. I was going to find out about Laos.

When we arrived back at our hotel, the La Ong Dao Hotel #1. I booted up my Mac and started researching Laos. I don’t know what I expected to find, but certainly not what I did. Most of the information I found concerned the incredible amount of bombing done to these people by the United States. During the Vietnam war they had more bombs dropped on them then from all of the second world war combined (270,000,000 bombs!).  Of that two hundred and seventy million, 31 % of that ordinance (bombs) did not explode and remains active on Laos land to this day. Stated another way 80 million of the 270 million bombs dropped did not explode and are hazardous to the people of Laos.

I couldn’t help but be saddened as I read facts like Laos is the most heavily bombed nation ever in US history or by doing some quick math found that forty bombs were dropped for every man, woman, and child that lived in Laos. Reading more, I found that the bombing isn’t merely historical, but has very present day consequences killing or dismembering 100 Lao people a year and preventing agriculture on a massive scale. I was blown away when I read some of this information. How could these smiling Laos people that my children were playing with be the decedents of the most bombed nation in the history of my country? This is now the second nation that I have visited, Japan being the first, that the USA has blasted immensely. In both cases as I walked around the nations, rode on trains, and mainly, interacted with the native peoples I found myself thinking that it just didn’t seem possible that we were once at war with this country.

group aerobics class at the park

As it turns out, Hillary Clinton arrived the same day and into the same city as I did in Laos for many reasons, but chief among them to apologize about the unexploded bombs and commit to removing the ordinance and assisting victims. Roughly 1% of the unexploded bombs have been cleaned leaving 99% left as a risk to Laos citizens.  Her statement was as follows: “we need to do more.” Before her visit, the last high ranking United States official to visit Laos was in 1955 by John Foster Dulles, the then US Secretary of State.

I can’t help but wonder if sometimes it’s easier to blast a country into the Stone Age when your kids haven’t played with their kids at a park. Or done group aerobics with two hundred of your closest strangers in a park.  Yes, after seeing the Laos version of Richard Simmons leading aerobics in the Mekong River Park, my family and I returned the next day and joined the masses to participate in the aerobics class. In case you wondering, yes, it was awesome, and of course we bought sweatbands to make sure we looked the part. As I type, I am still sore from all of the crazy gyration’s the Lao Richard Simmons had us do. But it was fun to spend time with these people, to laugh with them, to be silly with them.

I will readily admit that I am not a scholar on the historical activities of Laos or the intricacies of every step of our decision to blow the hell out of them, but after spending time with these warm and friendly people, I just can’t help but feel that maybe before blasting someone you should spend time with them. If anyone is interested, I can direct you to my family’s favorite group aerobics site, I’m sure you’ll have a great time.

Sources include the following:

There were a few more, but these were the primary.